We invite you to visit our family island. Over 1.8 million annual visitors enjoy the beaches, fishing, shopping, dinning, golf, tennis and entertainment on the sandy shores. The Beach gained a reputation as the World’s Safest Beach because of no undertow and shallow water. People can walk the entire 7-mile length of the island along its sandy shores. Turn the hourglass and watch the sands of time trickle back to the past of Fort Myers Beach. Return to the time when pirates buried treasure, Spaniards built forts, Indians hunted on the Beach, homesteaders staked their claims, shrimpers netted pink gold, a hurricane severed a land connection and mosquito hordes clouded the air.

The last homesteader staked his claim in Estero Island in 1914. Leroy Lemoreaux cleared his land and survived by growing vegetables and fishing.

Lemoreaux remembered bears stalking the island and panthers howling in the night. In the 1890’s, the only weapon they had against the hordes of mosquitoes was smoke. Those were the days before bridge linked the island to the mainland of Fort Myers area. A wooden swing toll bridge was the first bridge built in 1921. The toll was 50 cents for five people. The 1926 hurricane washed it away and severed the slim neck of land attaching San Carlos to the mainland making it and island. Today, it’s still called Hurricane Pass. In the 1870’s, pirates plied their trade along the shores. That’s how Black Island, south of Estero, got its name. After a defeat by the U.S. Navy, Black Augustus took his loot and settled on the island. The family of John Butterfield squatted on Mound Key in Estero Bay during that time and provisioned the aging pirate with sugar, coffee, grits and other luxuries in exchange for vegetables. When the pirate died, he showed the family where to dig up his booty. Perhaps more treasure is hidden along the shores. Rumors persist that pirates used to sink long boats laden with treasure to later recover.

And Pirates weren’t the only sailors frequenting the island’s waters. Juan Ponce de Leon may have sailed waters around Estero Island about 1513. Hernando de Soto may have also dropped anchor in front of Estero Island in 1539. Relics of skulls and other artifacts found on Mound Key suggest that Spanish conquistadors may have passed through the Beach and perhaps built a fort on the hill on Mound Key. But the aura of mystery surrounding Mound Key belongs to the first settlers, the Caloosa Indians. The Caloosa’s origins remain obscure but some scholars such as Rolfe F. Schell in his book, History of Fort Myers Beach suggest that Caloosas may have traveled by rafts from Mexico’s Yucatan Peninsula. Caloosa artifacts displayed in a Fort Walton museum would be claimed as early Mayan if displayed in Mexico, Schell wrote.

There’s little doubt of what caused their demise. Diseases such as measles brought by European explorers probably caused many of the Indian’s deaths. The Caloosa Indians kitchen middens, containing shards and edible shellfish remains, were found at the end of Connecticut Avenue on Estero Island. Since these early people cannot speak for themselves, their artifacts tell tales of their lives. Reverse the hourglass and return to our times. Today, the Beach’s tourist industry flourishes. Thousands of people come to dine on “pink gold” shrimp and celebrate the industry and the blessing of the fleet with a week long Shrimp Festival, usually held in March.

There were 3,425 households out of which 7.7% had children under the age of 18 living with them, 53.8% were married couples living together, 4.0% had a female householder with no husband present, and 40.2% were non-families.

31.7% of all households were made up of individuals and 14.9% had someone living alone who was 65 years of age or older. The average household size was 1.91 and the average family size was 2.29.

Wondering where the best place for a sunset is? Or where to watch the big game? Our FMB Insiders are here to provide useful local knowledge! 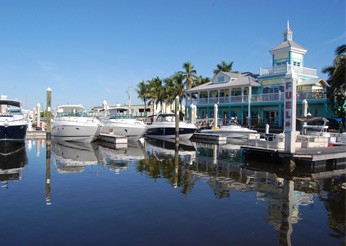